Trying to Prove Ourselves

I played ping pong a lot in college and got pretty good. You could say I even prided myself in my talent. I remember one instance where I played really easy on my friend (we will call him Chris) who was known for his lack of talent, so I decided to let him win. Chris’ reaction made me feel like my charitable act was good. But that wasn’t the end… 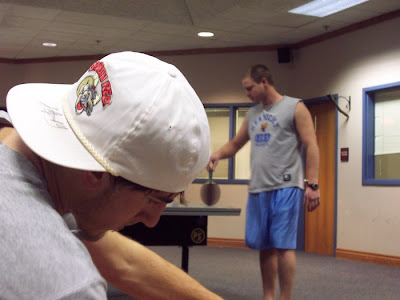 (This is not "Chris", this is actually Luke Helm one of my toughest competitors)
…the next day I had three people including my friend come back up to me and comment about how shocked they were that Chris had beaten me. That really started to bug me. It was okay to let him win… but to let others honestly believe that he was better than me, to let them honestly think I was not as good as I really was, and then to reaffirm his win with my own two lips without trying to defend my skill was
HARD!
i thought,
"I am better than they think i am."
"Can i really let everyone think Chris beat me?"

It wasn't worry about lying, it was my pride being challenged,
But it was good for me.
And I actually believe that was at the heart of Jesus’ sacrifice.
Look at verse 8: of Philippians 2

5Your attitude should be the same as that of Christ Jesus:   6Who, being in very nature God,   did not consider equality with God something to be grasped,   7but made himself nothing,   taking the very nature of a servant,   being made in human likeness.   8And being found in appearance as a man,   he humbled himself   and became obedient to death—   even death on a cross!

God humbled himself in Jesus by actually letting others think he was just a man, mock him, challenge his power, and that he deserved to be treated as a man. Not only that, but he didn’t have a complex about proving himself to be God while he was on earth. The point wasn’t to prove he was better than everyone, but to ultimately help us in love!

God is still working on me in this area.

Just today, God spoke to me about reevaluating my ministry goals. While most of my goals are out of a pure heart and just enjoyment of life, I realize that:

I still have an underwriting drive to prove that my ministry is as good as I know or believe it is.

I want to show that I am an accomplished adult, minister, and man. Although there is truth to this in Christ’s power, I believe that as long as I still struggle with my “proving myself complex” I will never fully understand the heart of Jesus’ sacrifice which went fully beyond self-glorification and what was deserved, because of his love and desire to truly help others.

God helped me write this statement of freedom below a few months ago, but I think it is a statement that I will constantly be learning and redeveloping for the rest of my life.