For stories on the support raising in San Diego check out my missions blog: www.brentdongellnz.com

GETTING ON THE BIG SCREEN 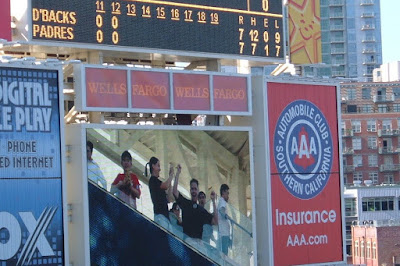 If you can't tell that is me raising my hands on the big screen at the Padres game and my friend Tiffany Tomlin taking the picture. you can click on the picture to make it bigger.

So it was the end of the ninth and i told Tiffany, "I will get on the big screen before this game is over!" She retorted, "yeah right" in disbelief and rightfully so, but my efforts began.

We were in the top section so it wouldn't be easy to pull off but most people on the screen just seemed to have a hand raised in the air so i tried an inning waving and nothing happened, except the game went into extra innings!

Progressively over the next 2 innings i went from waving an ice cream cone in the air while sitting down to dancing to jumping up and down, telling tiffany that, "all they needed to do was get me on the big screen and the game would end."

Then it happened, top of the thirteenth (look at the picture) while a promo video played on the screen, a camera locked in directly on us and we got a thumbs up from the camera man. Sure enough, the video ended and we had about 15 seconds of big screen dancing and cheer time!

and guess what, the Padres hit a walk off home run that inning!
...it could've ended a lot sooner! :)

LEAVING MY MEMORIES BEHIND 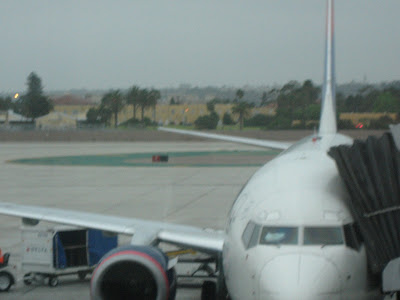 This was the view from the airport as i was leaving. As i sat there looking out the window i realized that the grass and palm trees in the back ground was MCRD! That is where my high school football team had our summer training for the year and it was tough!!!

It was good memories there. Football was a time of hard work and commitment to God for me. i remember one night when we had played football all day that i had not had time to read at all. Luckily when the lights went out, i had a spot by the end door where the outside light was shining through a small glass rectangle window.

So i got out my bible and fed it through the light to read it line by line. i thought everyone else was asleep and i definitely wasn't looking for recognition, but my coach was making rounds and made some kind of passing comment about "only Dongell" and "you should probably get some sleep." It wasn't a moment i wanted to be recognized, but i thanked God for the encouragement and we had a chuckle about the shock value from the coach.

Good closing memories to my trip in CA.

SURFING WITH THE SHARKS
Last Thursday i was in the water the day of the shark attack. Still kinda crazy but not earth shattering. The second day we were out we saw some dolphins and had a seal pop up in between us surfing, so we are used to creatures startling you in the water.

But there definitely an added sense of watching out for yourself although i don't think it will stop many dedicated surfers. For more on my initial reactions you can go to my original post