"What is the difference between a Catholic and Christian?"

This was the question i was asked by neighbor's friend today!

I apologize to those who were excited by the title because you thought i was actually going to discuss the differences in religions. sorry this is not the case. If that is what you are wanting, CLICK HERE

The hard part was that i missed a chance to share about my faith. It is amazing how quickly those opportunities can come and go before you even realize it!!!

By the time i was formulating what was actually important, the guy had already responded confidently smirking, "i already know the difference... which one is it that believes in Mary and stuff?" I chuckled and replied, "You would be thinking of Catholics there." and he responded, "Told you i knew" made some stereotypical joke about the flack Catholic priests have taken in the news and he was on to the next topic before i got anything out, but it was in a crowd and it was the first time we met so i wasn't convinced it was the place or time to push the issue.

But it really got me thinking as to what i would want to say in future conversations like this.

I got lost in my own brain and political correctness!
I was trying to figure out how to explain the theological differences between Christianity and Catholicism when i don't think that really was the question or even interest... 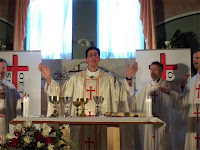 What i really found myself focusing and clarifying on the way home was," What is the beauty of what i believe?"

The next time i am asked this question i think i will respond in that moment by saying something like, "Well we both believe and preach that Jesus is the only way to heaven and to really find answers in this world. We go about that in some majorly different ways, that is where some people get hung up on prayers to Mary or the saints, etc. but the important part i guess, is that we are starting with the fact that we find our answers with Jesus and the Bible.

In short, i will probably take a question like this and use it more as a springboard for curiosity rather than focusing no answering the question unless that really seems like the issue on the table.

All that to say, God has been good in providing me with new opportunities to talk to my neighbor and his friends.

I saw soccer(called football here) as a good connection tool and was worried about playing with my neighbor's team for the first time last Tuesday..

I scored the game winning goal (2-1 final score) the first game and the two teams were debating on which side i would play on the second game! It was almost like God opened the door and rigged it so that i would have the opportunity t0 play in the future. Really cool.

I will probably going to try and take a few friends and go hear a comedian at my neighbor's parents' restaurant next thursday as an opportunity to mix our worlds a little bit. we will see!
Posted by B at 7:28 AM