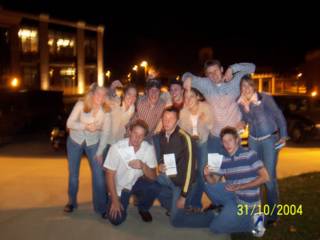 barn party extravaganza
So a group of us went down to a Purdue for a Barn Party put on my a Christian club last night. It was a fun time to dress up, meet people and talk, eat country food, and listen to country music. The real fun didn't happen until afterwards... or not!!! I had just finished telling my car that if something bad is going to happen or if someone is going to get caught for something it is me. Our three car train and a random minivan were cruisin down a country road at a decent speed on our way back when a cop behind us turns on his lights. He proceeds to go to the front to pull over the rabbit right... Oh NO!!! He blocks off the road and pulls all four of the cars over just around quota time at the end of the month and gives us all tickets for going the Same Speed! Not to mention by the end there were 3 or four cop cars there by the end. Now, as seen in the picture us drivers were not too excited, while it seems that everybody was having a great time. Maybe it was the fact that it made it was a memorable night, or maybe it was just the fact that there memories and entertainment didn't cost them $70 and a mark on their traffic record!!! :) Either way, it was definitely an experience and a night that won't be forgotten
Posted by B at 5:03 PM

oh my brent dongell... i´m going to need you not to get speeding tickets.. that´s out of control! still havent gotten one yet. and proud of it. anyways spain is good... gonna get to do some more traveling in the next couple of weeks before i head back to the states for christmas. so exciting! anyways have a great day! kim