Our Most Effective Spiritual Growth Model by Kingswood's Pulse

Why We Do Pulse, Pulse Groups, & Bands?

There's an abundance of research  Consistent Spiritual Growth Model Through The Centuries Of Large Group Meetings & Small Group Meetings and an Intimate Inner Circle.
Bands- (2-4 students) Our Bands function as core accountability and key to spiritual growth, transformation, and vulnerability in deep relationships. [1]

Band Accountability Questions-  There are common accountability themes discussed in weekly groups of this nature including Scripture, Sin, Evangelism, & Prayer.

Groups- (6-8 students) Our Pulse Groups meet semi-regularly on Wednesdays for in-house discussion and serve alongside each other together out in the community and have 1-2 small group leaders that help to facilitate, lead, and pastor this group.

Why Lack Of Accountability In These Areas Matters:
Pulse Meetings
Pulse Groups
Bands


A Monthly Tip On Accountability
·      Why: (it matters in leadership)

What is Discipleship?
How do you know when you're a disciple, discipling someone, or have discipled or been discipled?  When are you confident you know how or can do it?


Here is a quote from this Article:

It is not alarmist to say that this problem is everywhere. It’s a grim fact.

Last week I spoke at a high school conference for Christian schools. One of the things I like to do to show the teachers and other adults just how essential it is to provide teens with the truth about pornography is to hold an open forum—let the students write down any and all questions they have about the topic and submit them to be answered. Every time, teachers are shocked by what the students are asking as they realize just how far this menace has spread and how badly it has infected our schools.


Some examples of John Wesley's Band Practices and Beliefs:

Wesley believed that spiritual formation was fostered as persons of the same gender met in small groups of five to eight members. The purpose of the weekly band meeting was for testimony and mutual examination. Particular attention was given to overcoming personal faults and achieving a sense of forgiveness and peace with God.[1]

Wesley’s own spiritual pilgrimage had compelled him to seek and/or establish an atmosphere conducive to the cultivation of the inner life. Although he had been a frequent participant in the Religious Societies, they frustrated him by their lack of opportunity to bare one’s soul, to share ones’ spiritual struggles in a secure and accepting group.[3]

This method of “watching over one another in love” was the foundation, the bedrock, of Wesleyan discipleship. One of the most powerful ways that God’s Spirit moved within the early Methodist movement was through this system of small group accountability and support for holiness of heart and life.[4]

The role of “Class Leader” was not to be taken lightly. A few examples of the expectations of the leaders[5]:

…when I’m not sure I want to listen.

Saturday I just drove to McDonalds to get a coffee (and only coffee).

As I waited in my car to order,
a chocolate milkshake and a chicken sandwich somehow got added to the order in my head.  Right as this was happening, the verse that says, “Man does not live on bread alone…” came into my mind.

So I prayerfully asked God, “God are you my center?” to which I heard, “No.”  I asked, “Well then how can I rely on You to be my center today?”  To which I heard, “Don’t eat today.”  Here is where I sometimes question God's voice and whether this was really of Him.
An important detail is that I had committed to be fasting from food Saturday, so the voice wasn't random.

The current predicament was this: I'm questioning whether the request is truly of God to order what I want and tell myself that it wasn’t that big of a deal.  We do this as humans.  I’ve done this.  I question it, I do what I want, then I shrug this not listening off as no big deal or nothing I could be certain of so that it was okay.

The real hidden danger here is this:
A mistrust in God is the path to Hell.

It hit me recently, that the fruit Adam & Eve ate that led to their death was “pleasing to the eye and good for food…”
It was probably a better food choice than my McDonald’s order, yet it wasn’t good to eat.  Why?

I know what God’s voice sounds like in my life.
Yet I can also be tempted to question it (especially when I want differently and the request sounds uncomfortable).
Or I question whether I hear His voice if I keep questioning how He spoke to me in the past when I didn't listen and don't want to admit it.
But unless or until this voice in my head says something completely contrary to the Bible or His love, I need to respond and act accordingly.  I need to obey, if I want to grow closer to God by hearing and trusting Him more clearly.

When you hear what you believe to be God speaking in your head or spirit, you will be tempted to question whether it’s truly God or whether disobeying is really that big of a deal… IT IS!

We are to live out of trust in God's words rather than question and live contrary to His requests; Even when they are less black and white like whether to eat or not.  Follow God’s voice.  Don’t give into the temptation to question God's voice… to question whether it's God talking or belittle what He is asking to the point of you not having to obey when you're a little unsure.

I’m not talking about having no room to ask and wrestle through your honest doubts & hard questions.  I think God desires for us to be real with Him.

Drinking coffee versus adding a chicken sandwich and chocolate milkshake....
It may sound like I’m making a big deal out of nothing.
I believe a chicken sandwich and milkshake from McDonald’s can be the goodness of God… It's accessible, I have the money, it reflects the goodness of God providing.  But in this case, not listening to God's voice would’ve been me trading trust in God's voice for disobedience and a mistrust in what I think I hear Him saying.

The same can be said of:
-The fruit that was "pleasing to the eye and good for food" from the tree of knowledge of good and evil
-The meal traded to Jacob for Esau’s birthright
-The bread Jesus could’ve eaten from stone in response to the devil's questioning

Listen to God's voice and don't question when He's whispering or telling you to do what's uncomfortable, like giving up the good accessible things in this world.

I just got coffee this morning and passed on the food.  Thanks God.

“Satan will try to convince you that obedience carries much too high a price, but he will never tell you the cost of not obeying God.”[i]
[i][i] Henry Blackaby & Richard Blackaby, Experiencing God: Day-By-Day (Nashville: TN, Broadman & Holman Publishers, 1997),140. 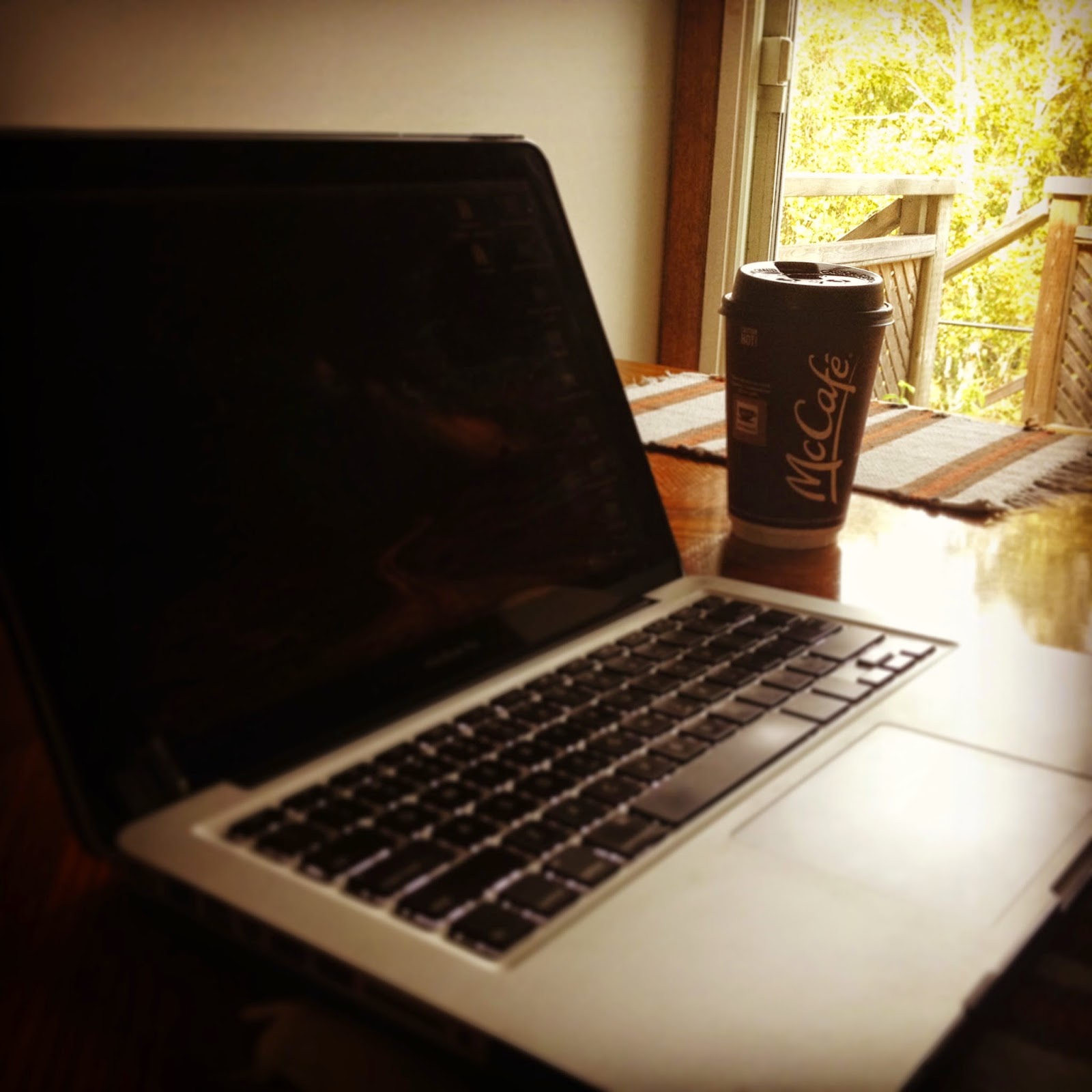 The Canadian Maritimes For Dummies (Part 10): A Few Church Options in Atlantic Canada

Here are some images to help you grasp the religious state of Canada and Sussex, NB: 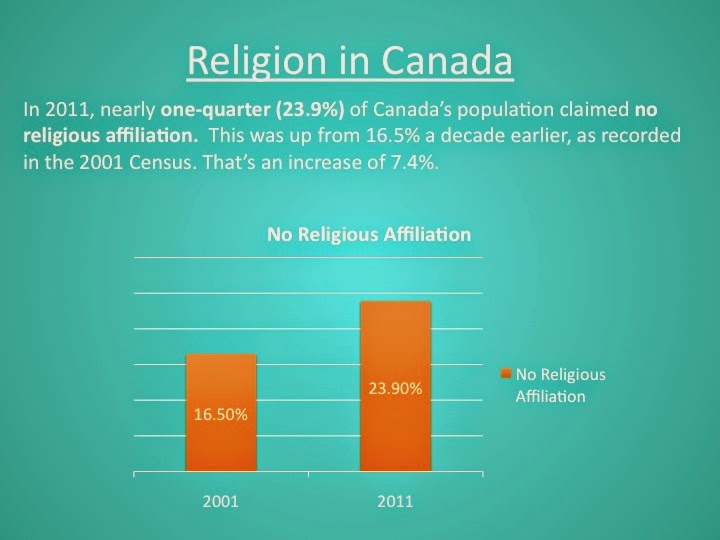 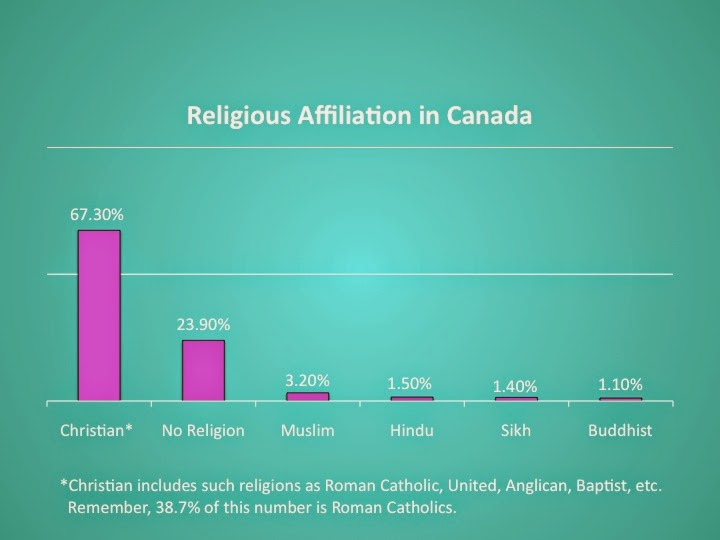 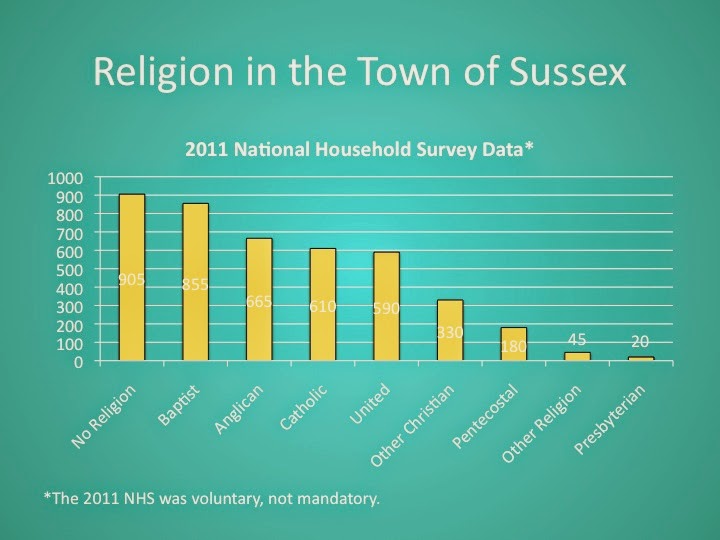 The Canadian Maritimes For Dummies (Part 8): Places to Visit 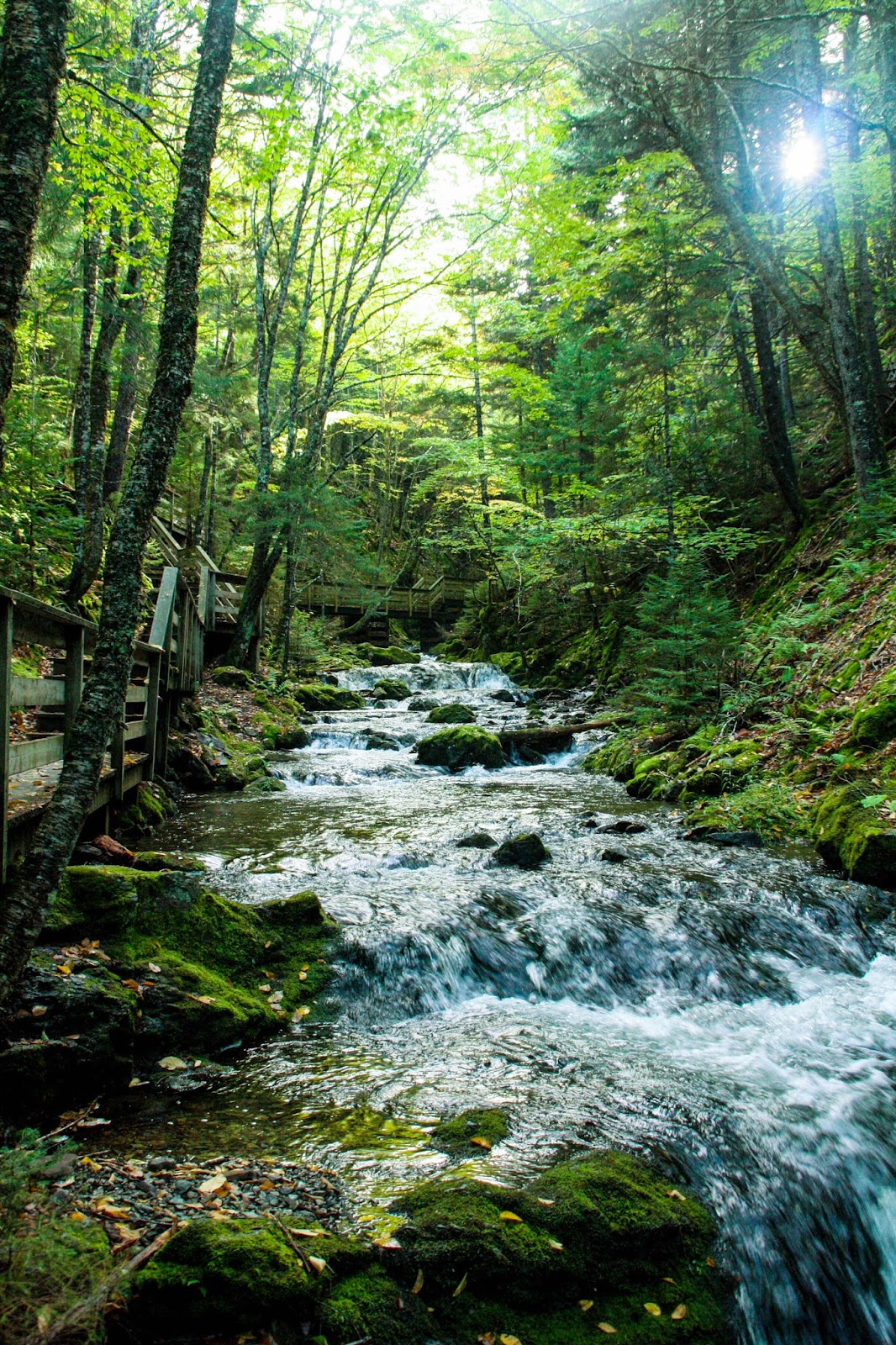 1.      Fundy National Park - this park is one of the most beautiful and breathtaking places in Canada. The Bay of Fundy houses the highest tides in the world and what a sight to see!
2.     Prince Edward Island - the red dirt, potatoes, Anne of Green Gables, and the beautiful beaches are just a few of the well known and beautiful sights of this unique island in the Maritimes.
3.      Covered Bridges - covered bridges are a historical and fairly common sight, especially in New Brunswick (home to 61 covered bridges). There's even a chip company named after them!
4.      The Tidal Bore - this natural phenomena can be seen in the city of Moncton, NB
5.      Magnetic Hill - this "gravity hill" is an optical illusion that will have you confused as you go backwards up a hill in neutral.
6.      The Hopewell Rocks - this world-renown sight has been sculpted by the highest tides in the world.
7.   Halifax Waterfront - walk the waterfront and see the beautiful harbour.
8.   Peggy's Cove - visit the picturesque lighthouse and dip your toes in the water.
9.   St. Martin's Sea Caves - walk the beach and explore the magnificent sea caves.
10. Kouchibouguac National Park - this beautiful park has 25km of sand dunes to appreciate as well as barrier island, salt marshes and much more.
11. The Cabbot Trail - this trail is a scenic roadway that takes you around the beautiful Cape Breton. It is one of the most famous drives in Canada and the sights will not disappoint you!

What places would you recommend in the Maritimes?

The photo above was taken at Dixon Falls, one of the many beautiful trails in Fundy National Park.

*These are approximates as university numbers flux regularly. 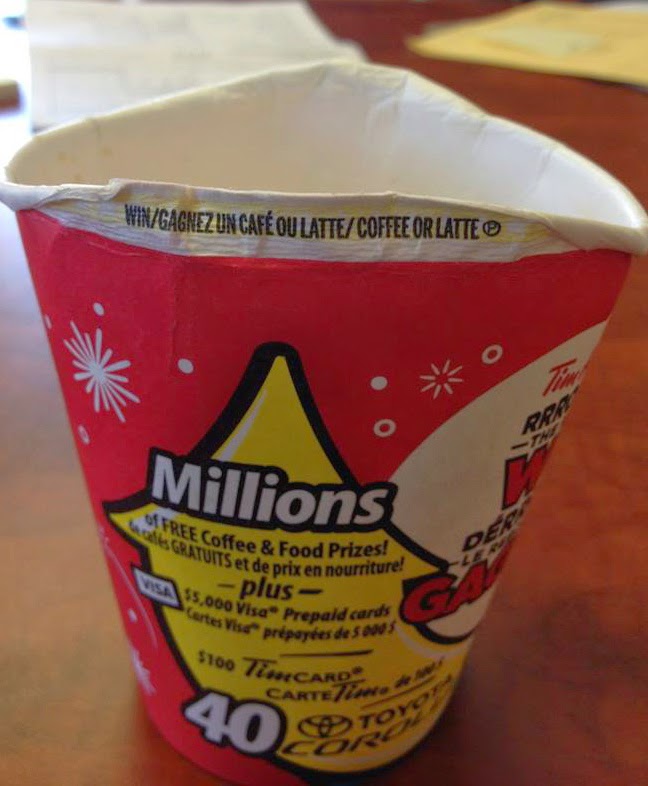