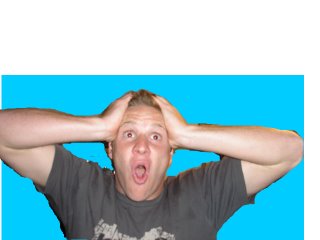 I HIT A LITTLE OLD LADY IN THE HEAD! So a few weeks ago me and some friends went to a park to hangout. We decided to play kickball so i ran to the car to get the ball. As i was dribbling back across the field i decided that it would be comical to loft the ball over a decent size bush separating me from my friends and land it on top of them. I successfully shanked the ball 90 degrees... that's okay though because noone saw me... right?!? Wrong. As the ball sailed through the air the wind started to carry the ball in the general direction of couple walking on the sidewalk, seemingly in their 60's or 70's. Oh yes leave it to me, the couple even saw it coming! The woman feebly raised her hands and ducked out of her way to no avail and seconds later i nailed the lady on the top of the head...Great shot... if i meant to do it, but i didn't. The lady stumbled to the side holding her head and despite my constant apologies never smiled or said any cordial "that's okays." Leave it to me! So this whole blog is dedicated to my accident prone life, i hope you enjoy"

+I Nailed a Mom in the Head With A Coke Bottle A mom was visiting IWU from Louisiana and was watching a movie in our school theater. After the movie credits there were just a few people left in the theater and i got ancy so i shot my empty pepsi bottle at a trash can at the top of the seats. I missed and decided to throw the bottle back done to a friend to give him a shot. Once again my bearings were off and the bottle sailed directly to the only other people in the theater and hit a mom straight on the head with the plastic cup in a perfect spiraling motion. once again if only i meant to... instead i walk out blushing and in complete embarrassment
+I Kneed Robin Thada in the Head We were at a friends house three years ago and Robin said she didn't know any self defense. I decided to teach her something i saw once in the movies. I told her if a guy approaches, kick him where it counts. Then when he bends over in reacthion to that grab his head and knee him. Well i am acting this out with Robin. It just turns out when i grabbed her head, she decided to show no resistance to my action and i kneed her hard. Her mouth was apparently open because I heard her teeth clench together.
+Nailed Trace With My Surfboard ONe time when i was learning how to surf i got caught in traces wave and when we both pulled out, my board came up, nailed, and scratched Trace in the Face. Four Years Ago
+Tore My ACl playing Church League basketball year ago
+Popped a Finger Tendon Playing Catch in the last joint of my middle finger. It just dangled unless it was in a splint. I did it playing catch!... too bad i played receiver for five years of football and never hurt my hands playing. Less than a year ago
+Broke My hand Doing a Back FlipAlso one of those humiliating experiences. Not only did it keep me out of basketball, but it was in front of half the cheerleading squad and jr.high soccer team at my high school.
+Hit By Surfboard, Lost Tooth, & Stung by Sting Ray Surfing I tried to do a trick that i wasn't ready for and the surfboard came back and hit me in the face. When i rose to the surface i realized i was bleeding on my face and that i needed to go to shore. I also spit out a tooth and realized i was bleeding in my mouth too. As i was wading in, a sting ray snagged the inside of my foot. Go figure, out of all days, this is the only day that i have ever gone onto shore and been hit on by girls because i was a surfer!
+A Blister From Plunging A Toilet: In High school i had to take it easy one week of football practice because i had a huge blister in the middle of my hand and i couldn't catch well as a receiver. The Reason: I clogged my football coaches toilet one night and couldn't unclog it with his old school plunger. My the time i finished i had a huge blister on my hand.
+Broke a Friends Finger at youth group playing basketball. I was in jr. high and i accidentally bumped the guy i was guarding into the wall and he broke his finger
+Football Player Sent Away in Ambulance It was an honest mistake. It was a missed field goal and as i dove for the lose ball i pinned the opponent up on his neck. He got a stinger and was taken off the field in an ambulance. Talk about your awkward moment when you feel completely horrible for hurting someone so bad and your teammates are on the otherside trying to give you a high five!
+I have had at least a few incidents of traffic tickets and accidents(all too personal to put on the internet) If you knew you may understand better

I might add more later, but that is all for now. I hope if nothing else, that you may take a little more pride in your life and that yuo may learn to stay away from me if you intend to never be hurt.

The Big Truth Here: One of the biggest truths and advantages we have to offer everyone in the world is that we know we are desperate by ourselves. Sure, we can do okay, but we SURE hope there is something bigger than us, because otherwise our future begins to look very blique, screwed up, and VERY accident prone with nothing to laugh at!
Posted by B at 8:46 PM

Yowsas!!! That's quite a list my friend! It was great seeing you a couple weekends ago! Have a great summer and keep in touch!

you totally gave me a bloody nose when going for a hug.

Anonymous said...
This comment has been removed by a blog administrator.
9:18 PM