Does God ever hate humans?

This is a question that I have wondered about but have yet to study on so don't take this as my final opinion. Hear are my initial thoughts without doing a study and I would love to hear your opinion before i post a response later. 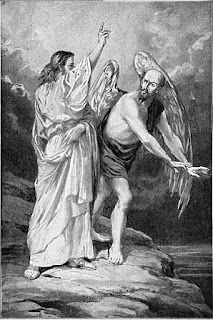 I do believe in the concept of God loving the sinner and hating the sin, but if my mind serves me correctly i believe God hates Satan... i don't believe he still loves him even though Satan was created being of God that chose to rebel.

1. If this is so, when nonbelievers go to hell, have they ultimately chosen to become that sin and therefore become enemies of God such as demons and Satan?

2. will God's heart still love them but understand that they have chosen their own punishment and feel no remorse? (if God feels remorse for his actions i would see it as a double standard)

I feel like most of the people i would talk to would tend towards (#2) God still loving the humans, but I am having a tendency to wonder why (#1) God's demeanor would be different between Satan and humans who are both created beings that have ultimately chosen sin and eternal rebellion against God.
(This may seem like an inconsiderate idea, but i will talk more in my follow up post)

hey Brent! I just found your blog from your facebook and I like this post. I think I tend to lean towards #2 because that is what I want to be true, but I think #2 is probably more true, but a better word would be wrathful. God in his righteousness pours out his wrath on those people that do not choose him which contrasts the holiness of the saints.