David Riley was a Good Man

This was crazy for me to hear that a football buddy from my class past away on July 26, 2009. David Riley was loved which is obvious by the comments on facebook and the support i am sure his family is getting back at home. I just wanted to take a few moments to remember who he was to me since i couldn't be at the service. 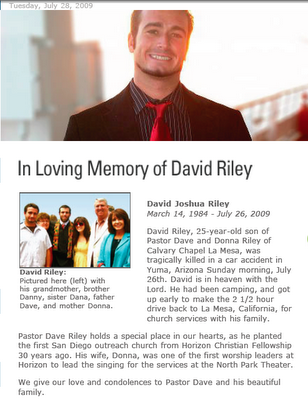 David Riley was always Smiling
One Thing i remember about David was that he did not make an extremely tough football player on the surface because he smiled too much. I am much the same way so i appreciated watching him. He definitely fit in with the cool crowd and was tough, but i remember never being that intimidated because you would see him running around laughing about one thing or another.

David Riley had a good Heart
I have not talked to David a lot since graduation, but in the last few months i told him how i was in New Zealand as a missionary and he responded in a manner similar to, "That is awesome. Taking the world for God in a Brent fashion." We didn't have a lot of deep spiritual discussions, but i would never question David's heart for loving others.

David Riley was Accepting
Like i mentioned earlier, David fit in with the cool group when he wanted to. That is why i was surprised one day when he decided that a few songs from my gospel cd "Kirk Franklin presents 1NC" were cool. I liked the music but i thought it was one of those dorky personal likes. All i remember is it either blaring from my car or his at the Jack in the Box parking lot on 2nd street in El Cajon and David saying that he liked the music with a huge grin on his face! :) Then i remember him dancing really quickly to it through one of our portable cd players in the locker room before a Friday night football game. Good times.

David was someone I respected for sticking to what he Loved
Even just writing about David is bringing a big smile to my face. I loved the fact that the football team seemed to hate on the sport of soccer and that David played both... and played both well at that. Their talk never seemed to phase him and the things that he loved.

David was just an awesome guy. He was great at meeting people where they were at and David was also great at just having a good time. 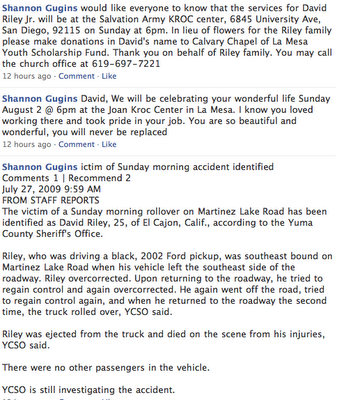 "A cheerful look brings joy to the heart,
and good news gives health to the bones."
Proverbs 15:30
Posted by B at 8:49 AM

Thanks a lot brent this was beautiful! I hope God is blessing you on your trip.

Anonymous said...
This comment has been removed by a blog administrator.
2:47 AM