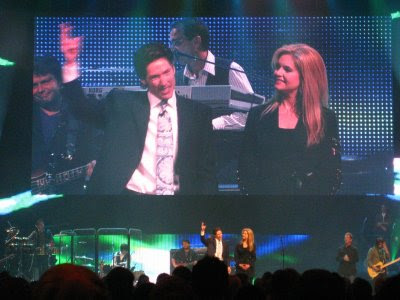 For my friends who are extra interested about how the Joel Olsteen service went. Thursday night Hillsong gave over the complete service over to Joel, Gloria, and the Lakewood Worship Team. This if the first time they have done this with anyone at the Hillsong conference.
I tried to get a picture with Joel Olsteen for my friends back at Cession, but security was tight and this is the best i could manage!!! 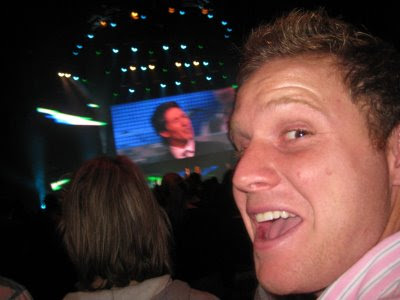 As expected:
Joel Olsteen being overly positive but I was also impressed and admiring of his purpose in trying to be a healer/restorer
I was a bit embarrassed of the production feel to their service. Hillsong is amazing at exhorting and engaging the audience where this felt more like the show. Where both churches have amazing musicians, this service seemed to showcase it more.
There was a lot more "you" empowerment talk than throughout the rest of the conference and it was not the same emotion/prayer of hillsong. It was extremely positive and around self empowerment.
I wasn't sure, but there seemed to be times where Joel was close to preaching a slot machine God where you can make God do certain things by your actions...
Joel and Gloria's delivery style was more Declaring/Telling instead of Exhorting/Teaching
It was definitely not the same as Hillsong and I am not sure whether Hillsong Conference will do something like that again because i hurt mixed reviews from my friends:
My end impression: Definitely not my style of ministry and definitely extreme in his style of teaching, but i really appreciated Joel's take on wanting to be a restorer and healer. I wouldn't consider him the most balanced or well rounded preacher by far, but i had to wonder whether or not i should appreciate him more for a more positive part of the Body of Christ that he may bring.
Here were my notes from Joel Olsteen's quips throughout the night:
"Don’t magnify the problem magnify our God"
"Never say we won’t have problems but the bigger your problem the bigger your destiny"
Ie. His mom had cancer but put up pictures of herself when she was healthy around the house to give her hope. 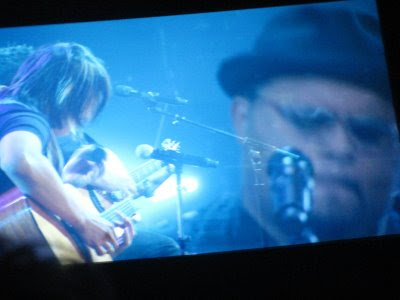 ie. You water a Chinese bamboo plant for 4 years without seeing results, but its making roots then it can grow up to 80ft in the next year.
It’s not what you have but what you do with what you have

Prov 15:13
Joel mentioned he’d talk a little more than get to his sermon
Everyone laughed thinking that it was a joke… but he was serious!!! ☺
"You're never closer to God than when you’re helping hurting people"

Encourage one another Good Samaritan. Are you willing to trade places?
Ie. Joel encouraged a stressed out waitress doing a poor job who broke down crying because her child was in the hospital and she couldn't concentrate
“There’s usually a good reason why someone is not up to par”

Prov 15:4 Gentle tongue brings healing
"I want to live my life as a healer"

Jim Baker- The Graham's loved him back into holiness by associating with him and inviting him back to church upon his church release.
"A true friend walks in when everyone else walks out"

Joel said he would prefer preaching: Christianity light vs Christianity Heavy
Matt 11:30 30For my yoke is easy and my burden is light."
Posted by B at 5:40 PM

Anonymous said...
This comment has been removed by a blog administrator.
9:01 AM

Anonymous said...
This comment has been removed by a blog administrator.
12:44 AM

Anonymous said...
This comment has been removed by a blog administrator.
4:40 AM

Anonymous said...
This comment has been removed by a blog administrator.
6:40 AM

Anonymous said...
This comment has been removed by a blog administrator.
5:42 PM