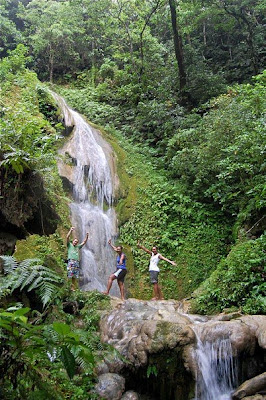 It has been so amazing to have so many different opportunities while being in New Zealand. I was wanting to get to at least one of the other Pacific Islands while being this close but I wasn't sure if it was going to happen... 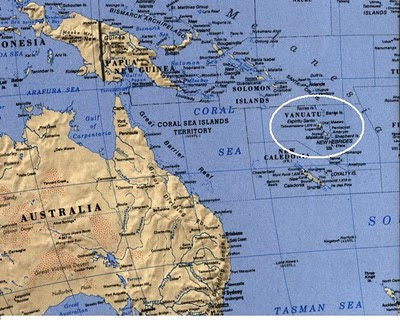 ...But with the help of some Christmas money from the parents and a friend working for Air Vanuatu Airlines, a trip to Vanuatu was made possible which is SO cool. So I was off to Vanuatu for the last week. 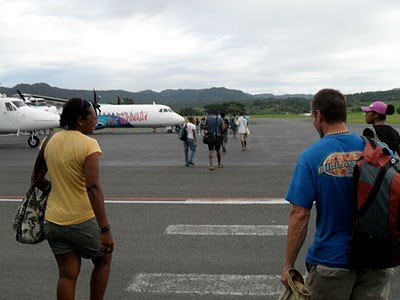 Kris VanBibber is a fellow missionary over here who is serving as the national youth coordinator for the Nazarene church and he was my traveling buddy. 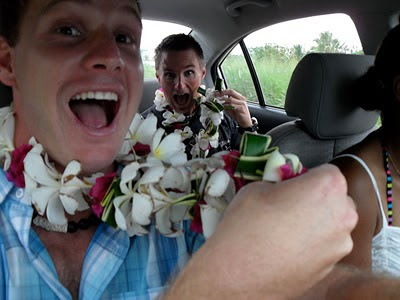 This was just after we got off the plane with fresh flowers from the garden put around our necks.
We were able to attend a Wed night bible study, see two different churches, and kris was able to meet and give supplies to a fellow Nazarene missionary there, but beyond that this trip was mainly a week holiday. 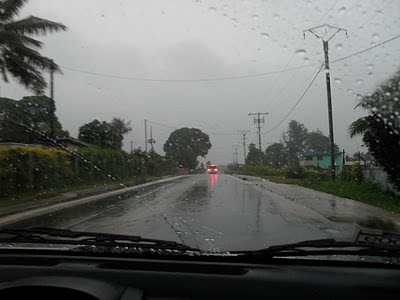 We were expecting clear blue skies but Sadly, because of the wet season, the weather was overcast and rainy off and on the majority of time. You know that wouldn't slow us down though! :) 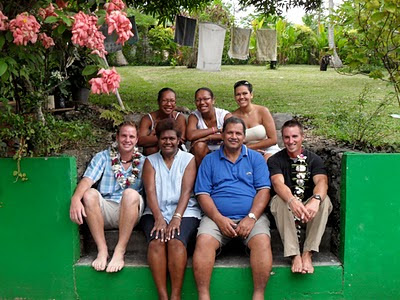 This is the family we were visiting. This is our friends' Vanessa and Bianca's family (top left). V and B live in Auckland but came from Vanuatu. 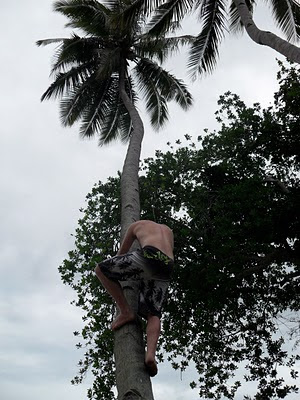 I was determined to try and climb one of the coconut trees and get a coconut like a local, but even with the help of little notches cut into the wood the height of the trees (as you can see below) was too much for me to brave without thinking i would kill myself! haha. I wished a climbing friend like Dave Hopewell or Graeme Els was there. They could've done it. 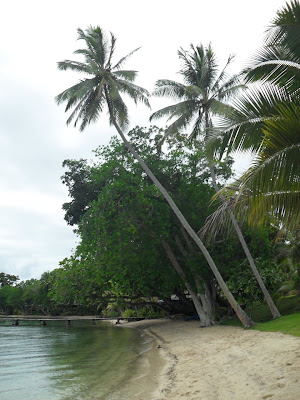 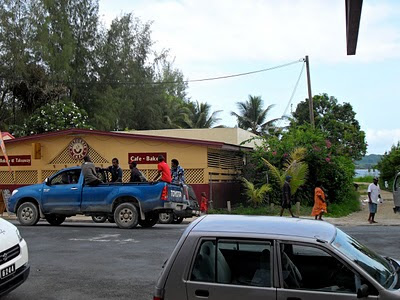 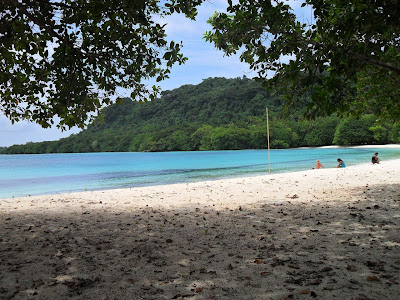 This is Champagne beach. I love California and New Zealand, but this is the first time where i had consistently warm ocean water to swim in... that was just amazing! This picture above was also about the only time we saw the sun clearly for a good hour or so for the whole trip and i still managed to get red for awhile. 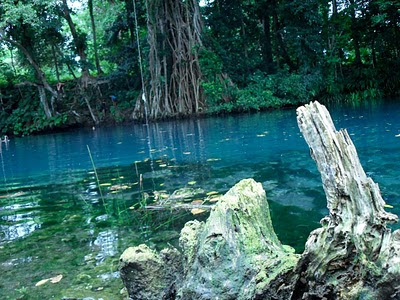 This is Blue Hole, and yes the water really just was the blue and clear! Here is me jumping from the tree after climbing the vines. Good times. 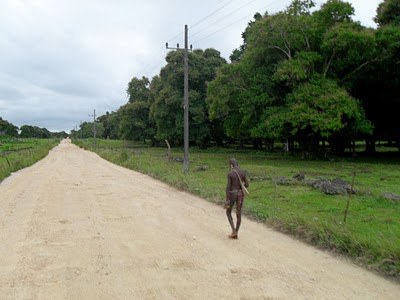 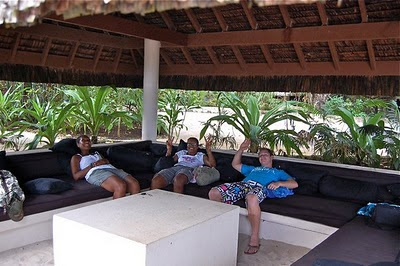 We were busy, but i also definitely caught up on just sitting around and sleeping. 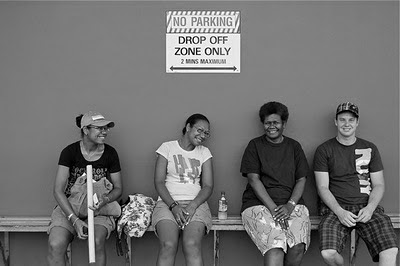 Kris took this at the airport. I feel like i am on an album cover here. 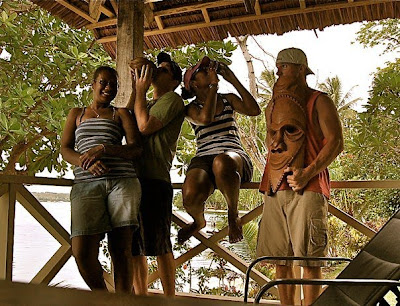 This was the core group and Kris holding a tam tam. I love how there Tam tams (tiki/totem poles) all were smiling. It just shows that NiVans (people from Vanuatu) are a happy people! Actually, they were called one of the most happy countries in the world on some survey or study from what i hear. 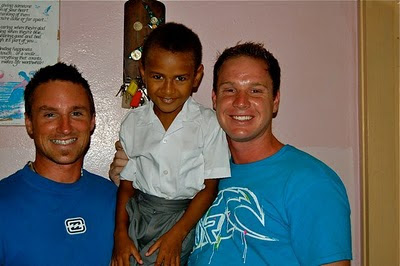 This was Nick who was a fun playing buddy who we watched DVD's and played spiderman and army men with. 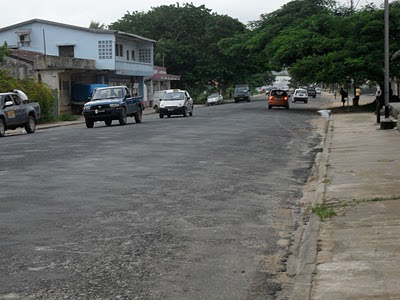 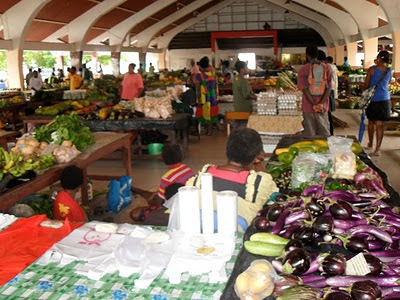 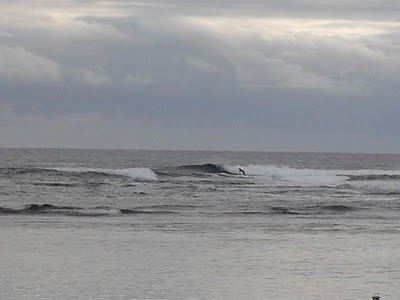 And yes of course i did beg to go surfing the last day on a reef break for a few hours! This wasn't me since it was rainy and noone took pictures but this is a guy surfing exactly where id did. I also managed to avoid the reef outside of the walk out and one time i slightly kicked it paddling to my board. 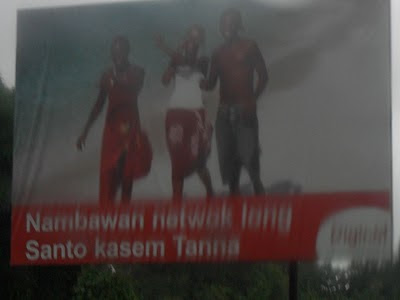 It was also fun trying to understand the pidgin English like above is how they would say and spell "Number One" in Vanuatu
Could you understand this writing in the red below? 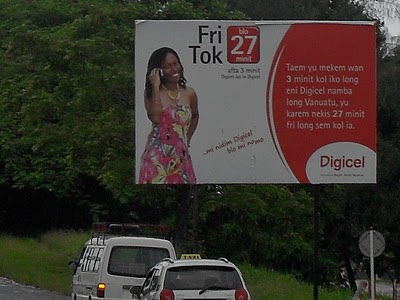 The Best i can make out the billboard is this:
When you make-a one 3 minute call it'll go to any digicel number along vanuatu, you get next 27 minutes free same call.
I thought this would be a time of contemplation about future, but it ended up just being a good time to relax and see a new place, while letting the stresses and worries of life slip away for a little while. It reminded me of Ecclesiastes 2

24 A man can do nothing better than to eat and drink and find satisfaction in his work. This too, I see, is from the hand of God, 25 for without him, who can eat or find enjoyment? 26 To the man who pleases him, God gives wisdom, knowledge and happiness, but to the sinner he gives the task of gathering and storing up wealth to hand it over to the one who pleases God.
I had worked hard before and leading up to the trip, so this was a time to sit back and enjoy.
I love how God can create so many beautiful places and interesting people.
Good Times.
Posted by B at 6:51 PM

What the billboard is trying to say is:
Make a 3 minute call to any digicel number and get the next 27 minutes free on the same call.

Thanks for the help. You are obviously a better translator than me. haha. I was going for the more literal translation you see... :)

Anonymous said...
This comment has been removed by a blog administrator.
7:37 AM

Beautiful! Looks like a fun time! I've noticed people in other countries and cultures call a "holiday" what we in America call a vacation.