I Officially Live in New Zealand When... 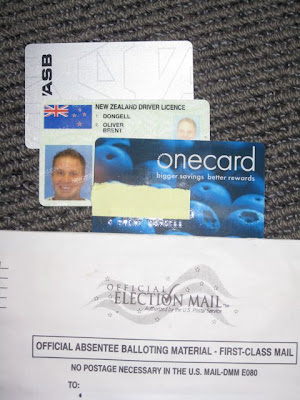 "I have an Absentee Ballot for the American Elections!"

Well done Brent! (or should I call you Ollie?!) Your transformation is almost complete...

i know your middle name now...beware...

With you on that one Rhett. I liked a mate's comment on facebook - 'if it wasn't for 8 years of Bush no-one would be worried that the US public would be stupid enough to risk Palin as VP.'
must...not....hassle...Americans.
Good job on Sunday by the way, you can thank me later for doing such a poor job before you that you were good in comparison!

...Oh, I am agnostic on the US Elections. I'm with Obama on everything but abortion. And if I was American that may be a big enough issue to stop me voting for him. But then again, abortion rates seem to go down under the Democrats more than they do under the Republicans...

Too. Complicated. To. Think. About.

Anyway, at staff meeting on Monday I got Rhys chanting for Obama, just to get a laugh out of Brent! That's what I was refering to.

the elections are giving me a head ache honestly... but i know it is important. Obviously Jake is more concerned about never letting me leave, Heidi has no clue there is an election, rachel would be a prime candidate for the democratic party, and Rhett doesn't know what he wants... good times, good times.