Future Blogs: People I was Reminded of..., Last weeks Adventures, My Thoughts on Evangelism 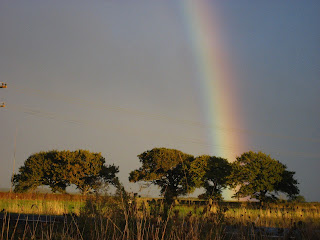 All Week Long in the midst of this madness, Dan and I have seen bold rainbows at least once a day! At the beginning of the week i was reminded of God's promise to Noah and faithfulness to never just give up on us as humans and sweep us all away by water again until his return! I saw these rainbows as a sign of watching over me, telling me not to give up even though everything inside of me wanted to. Dan has been seeing them as a curse as he lost his lens trying to take a picture of one! :) 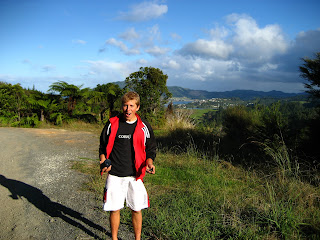 Not only that, none of the glass lenses shattered from the 6 foot fall from a van window going 40 miles an hour! Not only that but the way i found it was by jogging next to a biker asking him how to report a lost lens! Right after we found the lens a rainbow appeared back in the valley. It is faint, but there is a rainbow just above the tree behind Dan's head. Praise God. We felt loved today.

That is $500 saved! Also, in the process Dan's mom asked about traveler's insurance. This is still a big MIGHT, but we MIGHT get reimbursed for some of the other accidents such as the lens, my camera, my surfboard, or maybe the accident! 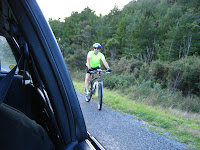 I have so much to blog and so little space to actually intrigue you and keep you reading...
until next time.
Posted by B at 9:35 AM

God is good, never forget that!

Hey Brent, this is Courtney Johnson...
I've been reading your blog here and there since you went to New Zealand and then decided to finally get one myself. But anyway, it's really great and encouraging to read about all the ways God is working in and through your life!!

hey courtney can you invite me so i can read your blog as well?

Of course...except I need your email to add you...the one you use to sign in with?