Updates on my life 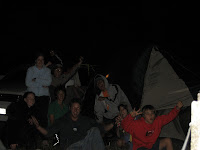 So let me paint a picture. I was in the middle of starting to write a post on my weekend excursions and where all my problems were at. 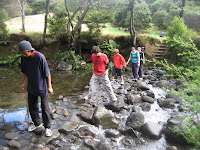 No wallet, which means no driver's license which means i lost a job opportunity where i would have to drive with money i need for other problems, camera getting fixed so using a lender camera, and about $1600 down for the accident (going to cost us about $200-300 to make ours roadworthy and $1450 for the other guy's car). I went on a camping trip this weekend and everything went wrong! It was a great weekend with the teens but nothing went as planned. We borrowed pastor mikes van and the clutch gave out on the hills because of the weight and strain. The van broke down on the way so we went to a different camp ground because we couldn't make it out to the cave to camp with the transport we had. Then tent blew over and the frame broke so we had to make shift a tent since it was about to rain.

The tent we made between the van and fence

I decided to take the teens for a late night swim to get their minds (or maybe mine) off the adventures so far and the water was so shallow, cold, and rocky that only 3 of us out of nine went swimming and we could only get to waist deep after walking about 200 feet off shore. When we got back the makeshift tent did... ok. It held up, but it dripped... it dripped practically on all of us. Once the guys were a sleep everything was fine although we were a little wet in the morning. The teens had a fun and memorable weekend, but as for me, it had taken a toll on me. I really felt like quitting all responsibility. But an amazing thing happened... 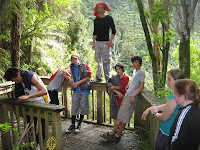 The body of Christ! I got back and the teens attitudes and the individual support i received from Julie, Geoff, Mike, Jan, Rod, Kerry, Dan, Julia, and Fiona was just incredible! I really was ready to sit in my room for awhile and just sulk, but they brought me through. God had also encouraged and shown me how my obedience was honored through my sacrifice. Thank you Lord. So here i am writing a blog and i put on the worship song "it is well with my soul" since i saw it as fitting. If you didn't know, the author who wrote that song had lost a family member if not all his family in a storm before he wrote this worship song. So i am listening to this song getting ready to write a post on how God was teaching me when i receive a call saying they found my wallet!!! That means i have a driver's license, can take the saturday job, i don't have to go through a lot of hassle for some other things! It was such a joyous moment as i got to share that with Jan and giver her a hug! I was telling people last night that i felt like this week was going to be a week of restitution. It has already started...Well, i am off to work. 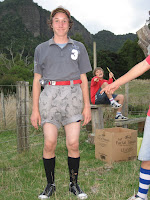