John 3 is one of my favorite chapters in the Bible. I have had some time to relax and think and have repeatedly read through John 3 on this Aussie trip. These were a few of my insights, thoughts, and questions that came up as i read over the chapters this morning. Dan just flew back to the US. It is crazy to think that i will be doing the same in less than a month. 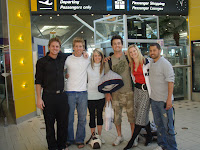 John 2
When the wine was gone, Jesus' mother said to him, “They have no more wine.”
2:3 Did Mary just have faith or had she already seen Jesus do miracles and know what he was capable of inside their family life? Was this his first miracle or his first public miracle?

And when he had made a scourge of small cords, he drove them all out of the temple,
2:15 He made a whip! This had to have been somewhat premeditated. To form a whip that is capable of holding up while kicking everyone out would take at least enough time for the disciples to say, "uhhh, Jesus what are you doing?" if not even more time that Jesus had watched the temple and then decided to take action.

John 3
2 He came to Jesus at night and said, “Rabbi, we know you are a teacher who has come from God. For no one could perform the miraculous signs you are doing if God were not with him.”3 In reply Jesus declared, “I tell you the truth, no one can see the kingdom of God unless he is born again.
3:2-3 You know that i am from God, but you do not believe or truly see that i am from God. You're response in v4-8 prove it.

5 Jesus answered, “I tell you the truth, no one can enter the kingdom of God unless he is born of water and the Spirit. 6 Flesh gives birth to flesh, but the Spirit gives birth to spirit. 7 You should not be surprised at my saying, ‘You must be born again.’ 8 The wind blows wherever it pleases. You hear its sound, but you cannot tell where it comes from or where it is going. So it is with everyone born of the Spirit.”
5-8 It is not just a flesh thing where you are born into the Israelites/Jewish community but it is a choice of the spirit!

You are Israel's teacher,” said Jesus, “and do you not understand these things? 11 I tell you the truth, we speak of what we know, and we testify to what we have seen, but still you people do not accept our testimony. 12 I have spoken to you of earthly things and you do not believe; how then will you believe if I speak of heavenly things? 13 No one has ever gone into heaven except the one who came from heaven–the Son of Man.
10-13 I, the son of man, have come from heaven and i am telling you these things yet you do not believe them or are not capable of understanding them. How am i supposed to go beyond physical earthly explanations and to explain the things of God, heaven, and beyond this world if we cannot start there?

14Just as Moses lifted up the snake in the desert, so the Son of Man must be lifted up, 15 that everyone who believes in him may have eternal life.
14-15 Interesting, very interesting that a SNAKE is used to redeem the Israelites and that Jesus being raised up is compared to a snake. It is almost as if it is saying the things that were not intended to be this way will be restored and not only will they be restored, but they will save and redeem many through their lives. The SNAKE, the tempter of man and his downfall, the snake that was killing people around the camp, is what they had to look to to be saved? The MAN, the son of man who lived in this world and was killed, the one who was a disappointment and joke to so many as a Jewish king, is what they had to look up to on the cross and be saved?

16 “For God so loved the world that he gave his one and only Son, that whoever believes in him shall not perish but have eternal life. 17 For God did not send his Son into the world to condemn the world, but to save the world through him.
16-17 God sent his Son as life to those who were searching to find Him! God did not send him to make more rules, but to show the world Himself! To save not to condemn. To open eyes, not to blind and kill.

Whoever believes in him is not condemned, but whoever does not believe stands condemned already because he has not believed in the name of God's one and only Son. 19 This is the verdict: Light has come into the world, but men loved darkness instead of light because their deeds were evil. 20 Everyone who does evil hates the light, and will not come into the light for fear that his deeds will be exposed. 21 But whoever lives by the truth comes into the light, so that it may be seen plainly that what he has done has been done through God.”
18-21 If you can't see God in Jesus who is God walking among Man then there really is no hope for you! I am not sure it is saying those who did not know Jesus cannot know God as much as it is saying, "If you can't see God in Jesus, God on earth!, then there really is little hope for you to find him elsewhere when everything that is God is right in front of your face through his teachings and life. It is as if, if you didn't have any excuse before Jesus, there is really no excuse at all why you have any excuse to say you don't see God or how to be save afterwards! What is more the problem is not Jesus, but that those who are in the darkness and have evil deeds will fear the Lord. Those of the light will embrace it and love it.

21 But whoever lives by the truth comes into the light, so that it may be seen plainly that what he has done has been done through God.”
27 To this John replied, “A man can receive only what is given him from heaven.
30 He must become greater; I must become less.
3:21, 27, 30 are three of my favorite verses in how i choose to live my life!
What does the argument over ceremonial washing have to do with people going to Jesus instead?

To this John replied, “A man can receive only what is given him from heaven. 28 You yourselves can testify that I said, ‘I am not the Christ [fn10] but am sent ahead of him.’ 29 The bride belongs to the bridegroom. The friend who attends the bridegroom waits and listens for him, and is full of joy when he hears the bridegroom's voice. That joy is mine, and it is now complete. 30 He must become greater; I must become less.31 “The one who comes from above is above all; the one who is from the earth belongs to the earth, and speaks as one from the earth. The one who comes from heaven is above all. 32 He testifies to what he has seen and heard, but no one accepts his testimony. 33 The man who has accepted it has certified that God is truthful. 34 For the one whom God has sent speaks the words of God, for God [fn11] gives the Spirit without limit. 35 The Father loves the Son and has placed everything in his hands. 36 Whoever believes in the Son has eternal life, but whoever rejects the Son will not see life, for God's wrath remains on him.”
John 3:27-36 I want to memorize! One of my favorite answers given by anyone in the Bible!
Posted by B at 7:53 PM

well we r seriously depressed we miss u so much already..
this jus dont feel right. and by the way that pic of us with the campervan i am to the laft and tash is to the right.. its ok maybe ur jus a lil confussed but i thought u would have worked out who we were by now...lol..

have an amazing night i hope ur plne trip is going well and im sure u will be having a great time with our family overthere...

membr to pass on our msg the hugs kisses and punches

i miss you girls too! I know which of you is which. I had added the picture later after the writing and they weren't directly related... that is why Sue is mentioned too. com'n girl you gotta know me better than that! Thanks again for everything in Australia... can you email me sometime so i have your address? Thanks