The Spirit is Moving!

Josh said as we were leaving, "I could feel the Spirit in the room tonight... you know how there are those times where just you know it feels different." 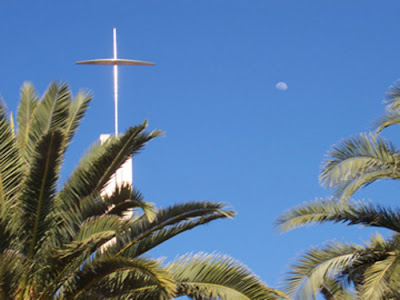 I was able to share about my call to New Zealand this Monday at the Young Adult's Group at Central. The talk and discussion went well, but the time i appreciated most was when the group gathered around and prayed for me at the end.

Chris and Brian both felt that God gave them specific messages during the prayer time.

Earlier Monday, I was asked about a potential job position at IWU that i was looking into for just the Spring just in case i wasn't back to NZ by January. I was told that i would have to consider more like a year and a half to be have a chance at the position. I was pretty certain i wasn't supposed to take the job, but it is very hard for me to turn down potential opportunities in general but the decision had to be made by Tuesday.

After i got the call i spent an hour in my office laying my future in front of God and asking him to be in control. I read through Proverbs 16, which i do whenever i am working through plans and future. Proverbs 16:33 Stood out the most.

"The lot is cast into the lap, but its every decision is from the LORD

Chris
came up and prefaced Brian's words by saying that while he was laying hands on brian's back during the group prayer, that God was wanting me to know and i quote almost word for word:
"that know matter what the temptations, frustrations, ...i don't know, even job opportunities that may come up, to remain focused and encouraged in what you are doing."

Brian
gave me a sheet with words he felt God had given him for me. The jist of the note said to make sure that since i had Joshua 1 prayed over me in regards to New Zealand that i would have to make sure to tarry long in the Lord's Presence as Joshua did(Exodus 33:11) before i would experience the conquering Joshua did later on in his life. That is beautiful as that is honestly the only thing that i honestly feel that i have done fairly well at over the past 4 months!

Whoever is reading this from the group. Thank you for being apart of inviting the Lord's presence into our group in a way that is allowing him to move among us. That will be Huge in the future!

Moses from the group shared with me a cool story about how God was working in his life, afterwards, you should definitely ask him about. I believe God is moving in the group and it will be exciting to watch the future results!
Posted by B at 4:00 AM

IWU!!?! then you'd be around again! campus isn't the same without brent dongell. :) jaja. what job are you gonna get?!

oh ok, if God is calling you back to NZ then that's even better for you to be where He wants you.