You never know the perpetual impact of your actions

I keep shaking my head when i hear the song on the radio right now by T.I. and Rihanna called "Live Your Life" and think about how it evolved.

Then a guy named Gary Brolsma posts a youtube video dancing to this song and it is watched (2 million times in less than 3 months... HILARIOUS... if you have never watched it, please do.

It goes viral and everyone is making a spoof of it online and playing it because it is so popular...

Then you take the pop song, add a little ghetto, and you have an instant hit called "Live your life" that tops the charts, all the teens know, & it just makes me smile.

I have a huge rubberband ball that reminds me of the same thing: 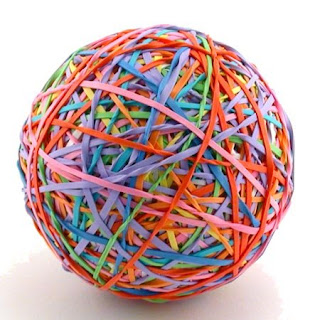 All it is, is a lot of small rubberbands put together. I often relate this to prayer and the impact individual prayers can have overtime. It started with one rubberband, and overtime as more and more rubberbands were added, you have the bouncy ball you now see. It just takes time and effort.

It will be interesting to see what small things i accomplish or morals that i implement into my life that others will grab onto and bring to a whole new level. It could be a huge support or detriment against the kingdom of God depending on what rubs of.

If only that whole process could be seen as easily as the "numa numa" song's evolution...

I think we would be a lot more apt to focus our energy on our lives reflecting the life and truth of God.
Posted by B at 12:18 AM