THE CHARGERS LOST
I was up and down the whole game!!! We lost at the end of the game... and then there was a penalty... and we scored and got the toss... then punted it... then got it back and went for the winning field goal... and LOST!!! I was exhausted by the end of the game! I think Michael Lieberknecht in the picture below felt the same way! 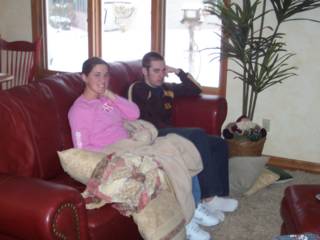 Janelle and Michael
I picked Michael and his girlfriend Janelle up from the airport on the way back to school. Due to the nasty snow storms in Marion and power being lost, they stayed at our house in Plymouth for a night. Talking to them makes me feel like i am back home.
Posted by B at 2:44 PM