So Wednesday Dan and i went surfing since the waves were supposed to be big. We checked out a new spot in Piha. You had to paddle close by a rock formation and paddle with the rip through the big waves to get passed where they were breaking.(See rock to right in pic below) As Dan and i went pass the rock, i got a little ahead. 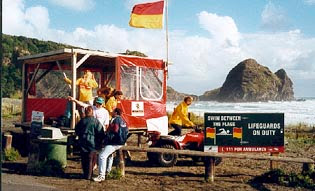 The waves were not the most controlled and big so after awhile i thought i saw Dan on the main beach close to where we had left our stuff, but that was way far off. After trying to catch these crazy fast and raw 8 foot waves and only managing to land one drop in and then get knocked off my board, i decided to go check on Dan after a half an hour. When i got to shore, i realized he hadn't been back to our stuff! If that wasn't Dan i saw come in, and he wasn't out in the water from what i could tell... then where was he?!? The last i saw him was paddling out beside the rocks trying to get through the big waves. At this point i am thinking to myself, "oh am i a bad teacher." So i go to ask the lifeguards if i can use there binoculars to look for Dan. Before i know it, my conversation with the lifeguard is being videotaped, a rescue boat was sent out, and a guy on a fourwheeler took off along the beach with another camera. It turns out Dan had taken a wave in and was watching from a cove where i couldn't see him. It was quite hilarious when they found him standing on the rocks watching! First a the boat came by and spotted him. Next a lifeguard started climbing the rocks, calling out to see is his name was Dan, and the next thing Dan knew there was a camera stuck in his face as well. It almost felt like the fun feeling you get at WalMart and when you get the workers to embarrassingly tell Dan to please come to the front! It was great. All in a good days laugh and that is not the best part. Apparently, the Piha Rescue actually has a TV show on Sunday mornings with their rescues and they apparently like to highlight ignorant tourists. We might make NZ tv?!? hahaha 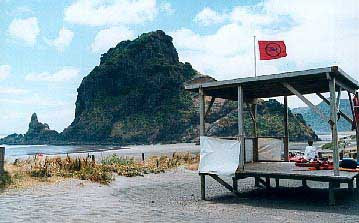 What a great story! I'll look for you guys on T.V.:)
-Ryan Robertson

I love Piha - its my home. Have a look at photos on www.pihanz.co.nz or www.pihabeach.co.nz Enjoy

Hilarious! Good laugh picturing that one happening! Thanks for the funny story! - AmyM