I've Decided 55mph is the Worst Speed Limit Ever!!!
It just taunts you on a major freeway.
It's like telling a runner not to sprint but run faster than 3/4 speed. What is that?!? 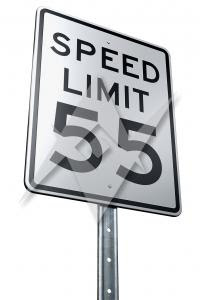 I remember getting a speeding ticket deferred in college, so i could not afford to get a ticket for 6 months. During that time i had to travel a few times between home and IWU where the speed limit was 55mph the whole way. My car wouldn't stay at 55. It wanted to go faster or slower but it wouldn't stay. it was almost like telling me to make up my mind!

So that is why we should rid the world of these signs and change them to 65pmh.
But who am i?...
just a disgruntled dangerous 23 year old who thinks every speed limit should probably be faster than it already is!?! :)

I am open to discussion, differing opinions, or correction, but they better be good!!!

Proverbs 11:;25
25 A generous man will prosper;
he who refreshes others will himself be refreshed.
Posted by B at 11:57 PM

Speed limits should, like, be totally outlawed except around schools. I too have a problem keeping my car at or even near the posted limit. It's like the car has a mind of its own but then I remember it's my foot that is attached to the gas pedal and controlling whether to push it to the metal or let up and coast. It's kind of the same being a Christian-when things are getting tough we push into God, the Bible, praying, other Christians, etc. but when things are going smooth then we tend to just coast along. By the way I love reading your posts-quite insightful for someone so 'young' :)