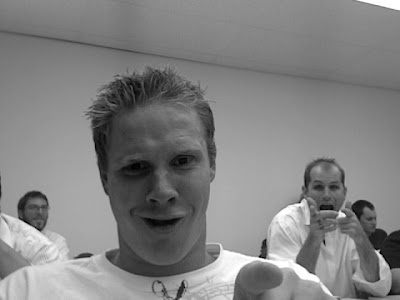 This picture is from class a few months ago
So the overall update from the last two weeks is just... too... BIG! I will complete that tomorrow, but here is just some food for thought!

I was talking to some friends recently about Christianity. They were arguing that they wanted to be Christian but that they believed everyone should be able to do what the want and to choose to do what they feel. That ultimately everyone should be able to believe what they want to believe. I am all for that argument. Yes!!! That is what is means to be HUMAN!!!

...but not for Christianity.
Don't Allow People to Use that Argument for Christianity!!! As Christians we proclaim that there is good and evil. We proclaim that everyone is entitled to choose how they want to live their life as humans, but we will hope, pray, cry, and scream our lives out as followers of Christ so that people might see....

...that people might see that following the Lord is the better way to choose.

Are you allowing people to think being human is the end
or are you helping people see why they even have a choice and what they can do with that choice?