Tomorrow: Update on Adventures Within Job... which i love! 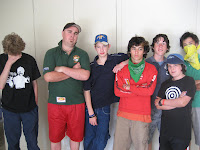 our guys cabins
The Camp was Awesome! I really only have 20 minutes before my midnight curfew, but i will do my best to explain the camp and the outcome.

The camp went from Friday at 7pm to Sunday at 3pm. We had a Friday night rally, Saturday morning rally, Saturday night commitment time, and final Sunday rally with slideshow, communion, and every camper receiving a personal bible! (something a lot of these teens probably don't have). 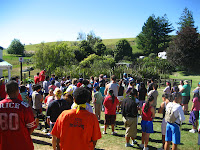 The Camp was loads of Fun in Between. I made a video that i will try to put online
There was a confidence/ropes course, a zip line, archery, kayaking, a water slide, hill karts, etc. We played volleyball and football at one point. (you have to clarify that it is American football or Grid iron or else Kiwi's think soccer).

We were able to take the teens to look at the unobstructed or distracted star filled skies which is always awesome to stand in admiration of God.

During the invitation time on Saturday night... almost every came forward!!! I didn't know what to think at first! But it turns out a lot of big commitments were made! For a lot of these teens this gathering of 80 Christian teens and a compiled youth band was the closest thing to a youth retreat/camp that they have ever experienced. 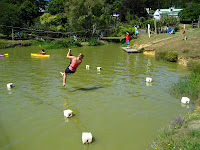 A lot of teens at the campfire sharing time Saturday Night admitted to being skeptical about camp being boring, but all sharing that it had gone over and beyond their expectations. There were some blossoming leaders and preachers in this group.

Since coming back: A lot of Shoregrace teens have taken there commitments very seriously.
A handful of teens started up a small group on their own where they are all in the process of sacrificing something for lent some commitments being: not putting anyone down, no playstation, etc.

It was an awesome camp, let alone it being the first one in a exciting tradition to come. Us two random guys were a part of the beginnings of a youth camp that will continue to grow and blow people's socks off in New Zealand in the years to come!

Geoff Davies did a great job helping to coordinate that!
Exciting Times
There is so much more there untouched, but it is bed time. Until tomorrow!
Posted by B at 4:52 AM