I hope you have been enjoying the videos so far. I will continue to post videos, but i don't want to slow up the blog too much, so instead i will post the link for you to click on(see tim tam's video at the end of this).

This post is dedicated to something i love. Food! The food down here has been great so far. We have had BBQ a lot! 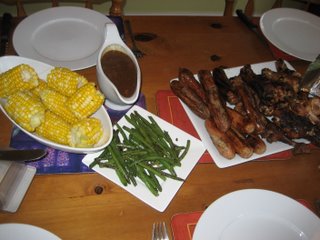 Above:tonight's dinner
Instead of Hot Dogs they eat a lot of Sausage. They don't consider hot dogs real meat... but then again, neither do a lot of Americans! just kidding

There also aren't as many chubby kids here as far as i can tell. In the states i could walk around and usually point one out, but here chubby kids are harder to come by. I am not sure if it is the kind of food or smaller portions, but whatever it is... it is working!

Seafood is popular but not forced on you 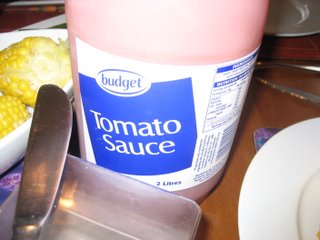 You don't have Ketchup to put on your sausage... they call it tomato sauce.
And it is not Heinz Ketchup, it tastes more like Arby's sauce with a hint of the taste of ketchup. I absolutely love it. A popular slogan is, "You're not a true Kiwi until you like the sauce"

I don't have a picture of a Meat pie or Fish and Chips but those are both big.

A Meat Pie is about 6 inches in diameter with a breaded crust and some kind of meat gravy and meat inside it.

Fish and chips are basically grease! Fried or breaded fish with french fries. 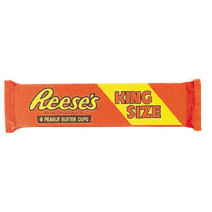 The People here love chocolate, but i haven't found many people that like the chocolate and peanut butter combo like in Reese's. Peanut Butter is not as big from what i can tell.

Squiggles, Pavlova, and Tim Tam's are popular desserts
smaller cookies(anything the size of an Oreo) is called a bisquit here. 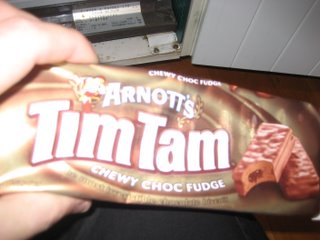 Hey there! So glad to see/hear you are having such a wonderful, diverse experience up to this point. It's great to read about all you are doing...there is much to say in response to your posts, but I have to make this quick for now. Good to know they love chocolate over there, hope that means you get to eat lots! Take care, my prayers are with you.

ahh, brent, so you finally got it right, eatting a tim tam?? don't be fooled people, brent totally messed up the first tim tam he ever ate!! it fell off in the drink!!! ha ha, enjoy! Thanks for the updates! -AP

One big mistake in that description - the meat pies:

No one's sure if its really meat...