The only reason you keep coming to my site is because there are funny videos... i know! So i'll keep giving them to you. This Hilarious video gets better every time you watch. Try It!!! Click HERE.

This post is dedicated to sports over here:
This is what i have seen about NZ sports but this may not be completely accurate 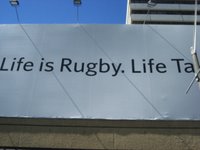 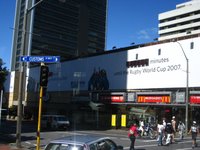 They have a billboard that counts down in days, hours, minutes, AND seconds how long until rugby season!

Quick Descriptions:
Rugby: The point is to get the ball into the endzone like in football by laterolling the ball backwards to teammates and running in. The difference is the touchdown is called a try and you have to touch the rugby ball down to the ground for it to count for 5 points and an extra point for 2pts. We had to explain to some teens for AWHILE that in american football the ball doesn't have to touch the ground, just cross the line 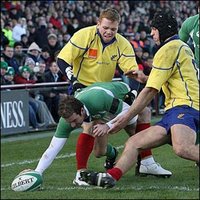 Cricket: A bowler throws the ball at the 3 wickets behind the batsmen. To see Click HERE If the ball hits the wicket on the bowl(pitch) or is caught in the air the batsmen is out. Each team gets one up for 10 outs If he hits the ball, however many times he runs back and forth between the two wickets he scores a run. if he hits it out the park he scores 6. if he hits it to the outer ring it is 4 points 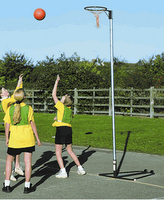 Netball:
To move the ball you pass it without running like in ultimate frisbee and the backboard does not exist!

They're schooling is different they go from year 1-13. I think that is Kindergarten
Schooling
They call Grades-
K-8=Grade School
9-13=College
College= University

So when i say college football it confuses them a lot because they are thinking high school.

While playing sports
I found out swears words in America such as the H word, D word, and A word are rather common words here and i don't think they are considered bad, maybe crude at worse.
Posted by B at 6:42 PM