This story is so important. Don't let the length stop you from reading it! Dan and I are going on a trip so i will not post again til Thursday! 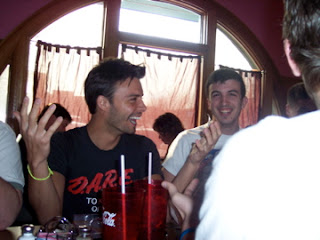 Please Read This Story!
Levi Huffman is someone in my life who has emphasized understanding my personality and knowing who I am in Christ. One of the things I realized through this introspective learning, was that it is far easier to get someone to change their patterns of behavior than to change who they are. So often we tell people how to change, but to really tell someone that there is something wrong with their personality or the way they are is extremely difficult! Take my own life for an example. One of the hardest things I have ever had to overcome was a lie that had become deeply embedded in who I was. One strength I saw in who I was, was my drive to move forward and change for the better. So although I would take a compliment and appreciate the tingly feeling it gave me, I would always try and be fair with myself and make sure to also focus on the related weaknesses and problems so that I would know how to be better the next time. I called it critiquing but not being critical. I just always assumed that this drive was a gift from God or His words to me. One night, as I sat and listened to some of my guy friends encourage me as to how my friendship had been meaningful and impacting in their life over the past year, I realized a strong pull. Joel was one of the guys. Joel’s brother had moved away and I really desired to fill that hole as a brother in his life over the year. It ended up not happening and it wasn’t my place, but as he shared with me how I had been a huge influence in his life over the past year, I couldn’t help but say to myself, “thanks. that is awesome, BUT I wasn’t the brother.” One by one I heard each guy encouraging me and it felt good, but at the same time I kept finding a fault, and calling myself a failure to make sure that I was also being realistic with myself and not becoming complacent or cocky. After the time of encouragement, they gathered around me laid hands on me and prayed for me. It was at the moment that these guys were praying over me that I realized for the FIRST TIME that that push to be realistic and to look where I had failed, could possibly not be God speaking to me, but actually Satan putting lies in my head to steal my joy. 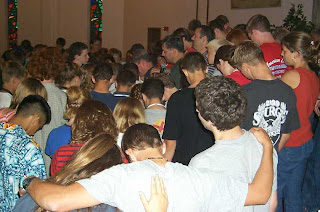 As I prayed strongly in the name of Jesus to combat these thoughts in my head that were lies about my failings: (“You weren’t a good brother… “You didn’t spend enough time with Him… “You had a chance and you blew it.”), it was one of the hardest struggles I have ever been in, in my life! I did not have control! Satan had so deeply ingrained this lie into my life, into who I thought I was as a motivated achiever, that I actually couldn’t control my own thoughts! It was Bad! I didn’t know they were lies. I thought these failure thoughts were my own. Even worse, I thought they were a gift from God in my personality. Talk about getting things twisted. I so appreciated those prayers over me that night as the men laid hands on me while I cried and tried to combat my internal struggle. It was almost as if I were throwing punches, but Satan just had my number. The next day, my friend Mark prayed over me during lunch. That moment, as he prayed for me over the lunch table, I experienced what it meant to be fought over as I began to cry in my feeling of helplessness and weakness. I had no clue how to change who I had become in my thoughts. It was one thing to tell me to enjoy the moment. To be content. That was easy! It was a completely other thing to challenge my motivated personality which I saw as a strength. One approach is not personal. The other is COMPLETELY personal! For those of you that feel uneasy because of this post… good! If this sounds too familiar to you, I am not going to tell you that it is okay to critique everything as a way to improve who you are. As soon as I tell you that it was okay for me to see where I could’ve improved in those friendships in the middle of that encouragement time, I give you an out. You would say that that is still a good quality to have. I am not here to do that. TOO many of us are cheated out of God’s love, grace, and our worth through HIM! As soon as you say “That is good, BUT…”, or you hear yourself saying I know God loves me know matter what… BUT I did this…” Question it! It is most likely Satan putting a subtle lie in your head that you believe is yours: that you are a failure or that you are not good enough or that for you to “make it in this world” and motivate yourself you need to think critically in this way. Satan almost all the time, if not always, is stealing your joy of living in God’s mercy and love. He is stealing your celebration of the goodness by pointing out the negatives. He is the ACCUSER. Satan is stealing your contentment by making you doubt that God’s love could actually be enough to motivate you… so you think you have to do it yourself!!! Harsh… I know. It hurts. You feel like what I say is true, but it is really hard to let go or to be sold on my thoughts. Yep, I was there too. Thank God I had friends praying for me and the Word to proclaim these lies from Satan for what they were and are. If anything I said above resonates, please seriously consider my thoughts. This is a deeper battle. It is no longer me just telling you that what you are doing is wrong, but it is me saying that something potentially is wrong with YOU, Although the problem may not truly be who you are or have to be. Just something that Satan has such a tight grip on that it is hard to see or let Go. Don’t walk away from the Lord’s moving if that is now. The Bible says that God forgives but I don’t believe it says that you will always have just as much opportunity to come back to the Lord at every moment. I truly believe that if God is tugging on your heart in this moment that you have a chance to come closer to God, walk away and probably come back to this same opportunity some time later in life, or to harden your heart and openness that much more towards the Lord’s moving on your heart every time you walk away. My prayers are with you in this post! 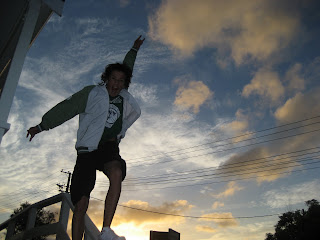 brent- amazing pics. we love that you keep your blog updated. this post is very powerful and inspiring. Sounds like the Lord is workin in you and through you, and I know you are shining the light of Christ wherever you are! Keep being a witness and living out the gospel! You're amazing. really.
ANne and I are praying for you. Looks like being a missionary is awesome!
i hope you're doing a lot of tim tamming. if you sent us some tim tams, that would make me very happy! i would send you money for tim tams!
well i miss you, have fun soakin up the sun- and playin with youth!

thanks for the post Brent, it was awesome to read. i miss you buddy