Dan Eggenschwiler
Dan and i are friends from Indiana Wesleyan University.He graduated the same year as me with a major in Graphic Design & Photography(hence his amazing pictures). He has lived most of his life if not all in Holland, Michigan. We lived in the same dorm together but never on the same floor. We always managed to do fun stuff together though: croquet, ping pong,ultimate frisbee, intramural soccer, pulling sled behind a car, 24hour straight hike, and the list goes on.

Geoff Davies
Geoff is now helping lead the Wesleyan Youth in New Zealand. He is a Kiwi. He attends ShoreGrace and was the youth pastor for a little while, but stepped back so he could be more involved in other parts of the church and national youth. We will work together with youth. He is organizing the first ever Wesleyan Youth Conference in New Zealand the 3rd weekend in February. He is all about the experience. He is the one who took Dan and I to cricket and to watch the fireworks over downtown Auckland New Year's Eve. 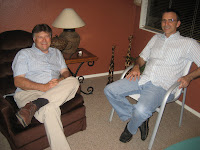 Jeff Fussner(on the right)
Pacific Area Director of the Wesleyan Church
Pacific includes Indonesia, Australia, Papua New Guinea, Bougainville, Solomon Islands and New Zealand. This means Jeff travels and speaks a lot.
Jeff and his family have been over in New Zealand almost two years from the US. They have been very kind and helpful to Dan and I. His wife Beth is creating a video program ministry with Annie Wright for underprivileged teens in New Zealand. Annie Wright
(furthest left)
2 Year GoNet Missionary in NZ through Global Partners She is also Jeff & Beth Fussner's Neice. We met out in California once before either of us departed. Her Dad is David Wright who was my professor and now is the Dean of the School of Theology at Azusa Pacific University. (This is where i have started my Graduate Work). She is working closely with Beth and Jeff and lives about 30 minutes from us in East Auckland

Mike and Michelle Yates
Mike is the pastor at ShoreGrace. He and his wife with one or two other couples planted the church three years ago. They are constantly having people in their house and have 4 sweet kids.
This picture is outdated but you get the idea. 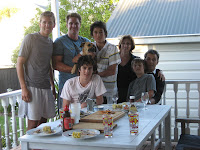 The MacKays (host family)
Jan Makes amazing cakes out of the home. Everything is edible on them too. Check them out HERE
Rod Helps manage a repair company
James 15 played Rugby for his First year
Rick 13 Rick is a sprinter
Sam 11 Sam loves his gameboy & playstation
Posted by B at 8:53 AM

You're doing a great job keeping us updated! It sounds like you are having lots of fun and that God is using you and teaching you much. You are in my thoughts and prayers! Keep up the good work with the blog! :)

My goodness, Jan definitely has a gift! How much do the cakes sell for?